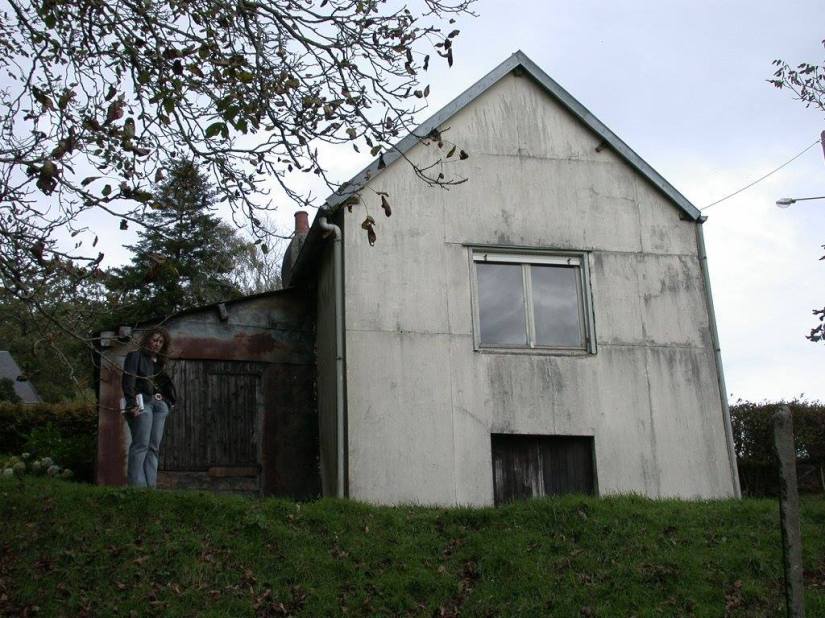 That’s me that is.  That 30-year-old woman has just purchased a house in Normandy, France and doesn’t she look thrilled about it #not.  Is it a house? Or is it a box with a ‘lean to’ attached to it?  You decide. I decided it was a shit heap and I much preferred the barn that we would convert, in a hamlet, that we had seen an hour earlier.

Only thing is, our offer had been rejected and this house was the last of the day, having spent 2 days of whizzing around Lower Normandy to look at equally unsuitable properties to buy.  Coupled with the fact the agent said, “good job really you didn’t get that house as it might have been set on fire – they’re not too keen on l’anglais.” Sorry? Say what? Oh great, we’re buying a place where the locals hate us and racism is alive and well. Sign me up.

This was in 2004, we’d only just had our first-born some 8 months earlier. A gorgeous baby boy (now 13) when my ‘partner’, now a fully fledged Husband, (he’d put a ring on it) announced he would like a to buy a place in France.  Are you insane? I’ve just had a baby, yes 8 months does count as just and you want to buy a house in France? Erm, not mentioned that before luv.  Those property programmes had just started coming into the homes of millions and by all accounts my husband to be had been watching with interest.

I had had a career in London and had bagged myself significant bonuses and like my husband said on our video footage of the house “it’s the price of a car – your parents have just spent the same money on a car”. That day he exclaimed “now you have a house in France as well as a house in the UK”.

Not only that, we had only just finished renovating our home in the UK – having previously renovated my flat in  South Croydon. Seriously, the underlay of the carpet was still cold and I was absolutely settled and content with my baby, completed home and maternity leave.

So reluctantly, I left my precious baby boy with a mum I’d met at ante-natal (still a good friend) and set off to Normandy, France. I’m not sure why he picked Normandy – I think it was the links back to the UK, the war graves and erm….. yeah not sure. Years later I did say, should we have picked a sunnier region do you think? But actually, it’s just a perfect location for us.

We stayed in a pretty dire B&B if truth be told but had a nice weekend looking at various places. I did get into the spirit of things when I saw the ‘barn’ but luckily it was rejected. I’m so glad we bought our little box, as doing up barns is not for the faint hearted. They are money pits and cold ones at that. Funny how things work out isn’t it.

The house was the last one in the village. It was in a pretty village of just over 500 people and had local amenities which in France is a tabac, a bar, boulangerie, boucherie, pharmacy and doctors. More recently, it has a petrol station and a convenience store. For rural France this is a buzzing town.

The neighbour who owned the property was a lovely man and wanted it to go to a builder who wouldn’t just leave it there. Yes, sorry about that. We didn’t intentially leave it there for 13 years but life just got in the way. We moved to another house in the UK, of course another renovation. We had another child, got married and had another.  I was offered my old job back in the city after I had our second, for the same money part time! but my husband felt this would be too much disruption to our family life. We led busy lives, my husband work was full on and whilst we did talk about ‘The French House’ it was very much left on the back burner.

At times, my husband did want to just pack up and leave but I was happy with our set up. I liked my life in the UK – I had my family, friends and the children where happy in school. Sometimes it was the elephant in the room as my husband would often bring up his desire to move to France and if it wasn’t for the children he would leave tomorrow. Later on, I decided that whilst I didn’t really want to move there – marriage is about compromise after all and I didn’t want to leave it too late for the children’s education.

We knew we couldn’t just leave it there and in 2015 we applied for planning permission to extend the property – we weren’t allowed to knock it down. To our surprise and delight, it was granted within 2 weeks.

Now that we had planning, we needed to do something to start the works so that the planning would stay in force.  My husband set off for 2 weeks of intensive works and did that 3 times from 2015.

The last time he managed to get out to the house (it had no water, electric or sewage system) he over estimated his capabilities and the roof was unfinished. He secured it with tarpaulin but a storm hit in 2016 – the tarpaulin became unsecure. Our neighbours daughter had been good enough to email us of this fact.

We went out as a family to survey the damage in April of that year and as I stood out on the decking and saw the most glorious view, I thought to myself, do you know what I could really live here.

When we got back to the UK, I set about putting the wheels in motion to move to the house, not the box, with a view.