Okay so in the UK it goes like this with regard to schooling:-

Pre-school, Primary, Secondary, ‘A’ Level (which is more than likely at the same secondary school or a college) and then University or College (that specialises in some vocational training). So for us Brits, and I appreciate that some of my readers are not British, college to us is further education. It comes after your child has completed their main secondary educational exams – the G.C.S.E’s (General Certificate of Secondary Education). The students complete an exam in each subject – so you will have a G.C.S.E in Maths, English and so on.

Here in France, like most things, it’s different. The educational system is very different. Whether it’s better or worse is open to debate. So far I’m liking it but I’m new to the system and maybe ask me in 5 years time when the novelty has worn off.  It’s all new and different and to be fair my son left the UK when he was choosing his G.C.S.E options. So we never actually completed the process.

I have a fondness for the G.C.S.E’s. I, myself, was the first generation to take them #old. We were the first guinea pigs. The UK government had scrapped the ‘O’ Level system the year before. Actually, the teachers had no idea how it was meant to work. I’m sure many would have got better G.C.S.E’s, had the schools known what the heck they were meant to be doing!

Funnily enough after we left the UK – the government decided (like they haven’t messed around enough with the educational system) that the old a,b,c grades would be scrapped in favour of grades 1-9 with 9 being the highest.

So in France, college is your secondary school. College is where your child goes from age 11-15 and the age of the child goes from January – December. Let’s face it, this makes more sense than the British system, where the age of the child and what year group they go in, commences from September – August. So my son being born in January is the eldest in his year. This is fine by me. My daughter is born in February and again is one of the oldest in her year group.

The years go like the list below, although please bear in mind that French children used to start primary school later than their UK counterparts. This has now been changed by Emmanuel Macron and now they will have to go from age 3 for a full day i.e 8.30 – 4.30pm.

So you will see from this scientific chart, that children finish their ‘secondary’ education a year earlier than in the UK, at age 15 and not 16.  Having said this, they will then go onto lycée a bit like ‘A’ Level college for 3 years and not the 2 years that they do in the UK. I have been told that this part of their education is a lot harder than the ‘A’ levels.

Now, our eldest had a big task in hand. He joined (with “ou es la gare?” type French) in 5eme and spent 7 weeks there before the summer holidays. For the first 5 weeks, he barely understood anything that was being said. In September, he went into 4eme which is the beginning of the two-year process for the Brevet. The Brevet is the secondary certificate of education that they will receive for all of the subjects. Not individual ones.

So essentially in France, to get a good grade, you have to be great at all subjects. Everything is worked out on an average – the ‘moyenne’. This is all that matters. So, in every subject your child will be tested out of 20. They will have a lesson, get tested on it very shortly i.e the next day or the a few days after and then over the course of the year their average will be worked out.

My son is naturally academic (although he has put in an enormous amount of effort to be up to speed) and good job he is sporty, as yarp, that gets a moyenne as well! However, he regularly comes last in music! So this invariably brings his moyenne down.  Now, depending on your child, this system could work very well or not so well.

Personally, I think this isn’t ideal for my eldest as the options he would have taken in GCSE he would have excelled at. This is because there is no way he would have chosen Art or Music. In addition, although he is intelligent he can’t get a perfect score or his ‘average’. In other words it’s nigh on impossible to get top marks across the board. This does not sit well with him.

My daughter who is more creative and historically isn’t a natural at maths, does very well in this system.  She is able to gain points across the board and she will invariable do better in this system than had she done GCSE’s. This is because she wouldn’t have liked to study intensely in each subject. This system means she is more than likely to get a better average score and higher certificate of attainment. Which in turn is giving her a lot confidence that she is actually an able student.

Like G.C.S.E’s a percentage of the students marks goes towards the final brevet score. In fact, a child could pass their Brevet before they even take their final exams in the subject. My son is on course for a very good – his average being 16.1 at the moment. This is an extraordinary achievement given that he arrived with no French, however, he has to obtain consistently good grades on all weekly tests. This is quite a pressure. There is no let up.

Furthermore, the students at his school all want to do well so there isn’t a culture of not bothering. For instance, if the class are set a group project they take it very seriously. They work on it out of school and arrange to meet up at each other’s houses. This did not happen at his UK secondary school – homework and projects were not taken seriously and there was a lot of messing around. The teachers would spend a great deal of time controlling the class. Here, class behaviour is second to none. I must stress that this is a private school. It is the top school in our region, however, this is not unusual. Teachers aren’t spending their time having to control a class.

In September, his final year,  it will get harder. The only saving grace, in a way, is that the work i.e the maths for example is 2 years behind the British system. So, for instance, this year he was learning the mean of numbers – this was covered in year 5 of primary! His maths teacher said when my son arrived, he knew maths that is taught in lycée. So the argument here is do we teach our children in the UK too much too soon? Or do the French not teach, in particular, maths soon enough? Will my son lose out on his maths and understanding as it has slowed down?

The French system is old fashioned in the sense that even if you don’t like a subject you have to learn it. Does this make for a more balanced education and the lycée will be more focused on individual subjects?

What I would say is the style of learing isn’t as creative as the UK system. Maybe the teachers wouldn’t have to be like dancing bears, to grab the short attention spans of the x-box sugar ridden Brits, if the class was calm? Maybe the French teachers don’t have to get creative as the student accepts that they sit and listen whilst being taught.  This can be quite boring for a child that is used to much excitement in a classroom. I don’t think this makes for creative individuals either.

My son and daughter also get tested on the previous lesson. My son thinks this, in a bizarre way, means he doesn’t actually learn things. How so? Well all you are doing is looking to pass the next test so he tends to forget that test and move on to the next one thus not retraining the information.  In the UK they would generally learn the subject and get tested, say after 5 weeks, on what they had learnt. They would have to go over the work and revise. Does this make for better retention? Discuss.

Here’s my son’s timetable in 4eme. 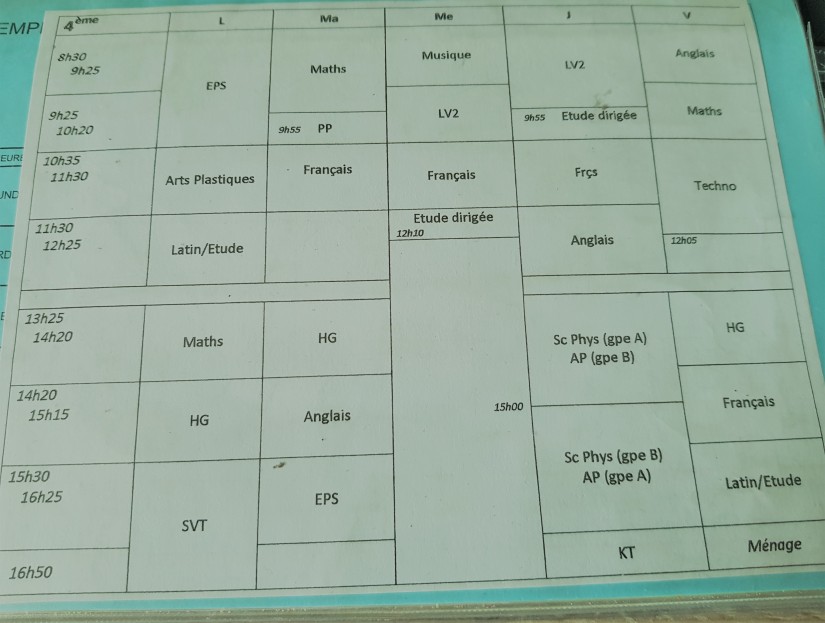 The school day starts at 8.30 am and being too cool for school most of my son’s classmates like to get there for 8.29 am. No one wants to be early. Yes, they do get a long lunch at least 1 hour 30 minutes. They also have a games room – where they can play pool, table tennis and pinball machines for the older ones. They mix (in this school) with the younger children from the primary that come over for lunch which means the family are all together at lunch time. I like this and it does feel like the school is one big family. All the children know each other and their siblings.

The school day finishes at 4.30pm and on Monday and Thursday’s it’s 4.50pm for my eldest. On a Wednesday they have to go in till 12.10pm as Wednesday’s are when most children have a sports activity or club. It’s very unusual for a child not to have an out of school activity.  During the school week and on Wednesday there is a study period whereby the students can do their homework.  There has been a lot of talk about home/life balance as french children get an awful lot of homework. Having said this the summer term seems to wind down from about May onwards!

And don’t forget they get much longer holidays – 8 weeks in the summer and the normal one week off in the UK is 2 weeks off for a few of the breaks.

Overall, my children do like it. They like the fact they are treated like mini adults and get to wear their own clothes. They can focus on their work and not have to be concerned about bullying and violence in school. They get longer holidays and yes they do get a lot of homework but they are managing it very well. They get to go on some great school trips and and languages are taught, in my view, to a high standard. This means not only are they fluent in English and French – they have a good command of German/Spanish and next year are learning Latin.

I hope you found this useful but feel free to ask questions in the comment section. I have also included a good detailed link explaining the French school system.