It’s the school holidays here. One of the big carrots for Master Normandy II to move here was double the half term holidays. Well more or less. This one is two weeks not one, Christmas is more or less the same give or take a few extra days. The February one – yarp that’s two weeks and, oh my days the April one is three weeks and not two! Although they don’t get the week in June off like the UK. Swings and roundabouts but watch out here comes the swing again – a whopping 8 weeks off over summer not 6 weeks. Okay the days are longer but pound for pound, franc for franc, euro for euro this ain’t too shabby.

Anyhow, this half term is called La Touissant Vacances. The holiday includes the 1st November which is All Saints Day or, as some refer to it, the day of the dead. Do they refer to it as that or is it just me? I think it ties in nicely with Halloween. Many French visit their deceased love ones in grave yards across the country – that’s why you see so many chrysanthemums for sale. No they’re not to give your neighbour for apero – gawd no don’t do that! They are to put on a gravestone. Incidentally, I do like to meander around a French cemetery – no I’m not particularly morbid but I just admire the beautiful granite headstones and the amount of care that goes into the final resting place. I’ve told the kids to start saving now and I want a massive headstone preferably in the reddish granite with lots of accessories if you please. In addition I will even have a picture on there – naturally in my hey day, my glory days not seen pre 2001 as standard.

Anyhow, I’ve been having a clear out. Much to the kids delight the first task of the holidays was to have a bit of sort out – a ruthless cleansing of their rooms. Now, the house isn’t that messy but I like to be organised and ready for Xmas. So, Master Normandy’s room got a rejig and he is much happier with it and we chucked out about 20 bags of drawings etc. I even got them to go through their pen boxes testing each one of those sharpies. I know. Please don’t judge me.

So I’m feeling pretty, pretty, pretty (if you’ve never seen Larry David in Curb Your Enthusiasm then you need to) darn good and super smug at this point. No only that, so high on my pen colour cleansing programme, I entered the playroom with much gusto.  Broken toys, too tight dressing up (no not mine) got shipped out and all those small parts that will never see the original toy ever again were not spared. 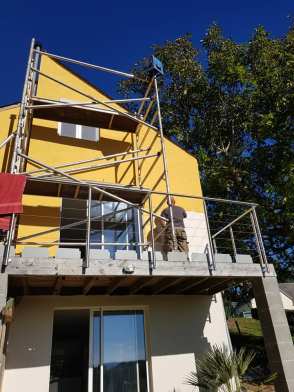 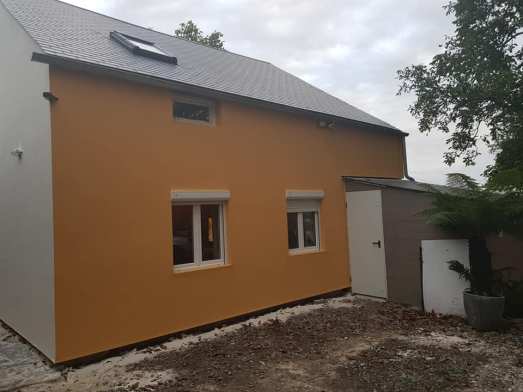 I also had other bags of stuff and Mr Normandy had all the packaging from the render he’d used on the house.  By the way, he hand painted the house using the colour phuket #snigger. It’s an off orangey colour and is actually okay.  The fact he lost feeling in two of his fingers rendering the entire house, with two coats and then painting it with a paint brush, is an unfortunate by-product of our house now looking like a house.

Right so off I go to the Déchetterie. I’ve double checked the times as websites and info don’t always agree. Now my nearest is 9 minutes away by car but our village is kind of linked in with a bigger town that is 20 minutes away so technically I should go to this one. Actually I have to – it says so on my déchetterie card. But what does a card mean? What does 11 minutes mean between our two nations? Yarp I was going to risk it for a biscuit. I’m feeling all clear out smug and the sun is shining. I’ve got Master Normandy to load the boot with me – we are good to go.

By the way, I have been to this déchetterie with my old neighbour – we used to go in his car (our crap – him and his wife were a huge help both mentally and physically when we were under pressure to move in) which was on Calvados plates, further away from our house but this is his déchetterie. Never were we ever asked for a card or where we lived.

We arrived just after 2pm and there was only one van there. The skips were empty and the déchetterie man is having a chat. Great stuff. I know someone who lingers by the normal recycling bins and then darting out with his stuff to avoid a cross-examination. I mean none of us are doing anything wrong but you feel you need to kamikaze in and out of these places.

Anyhow, we are now alone and the déchetterie man comes up to me whilst my son has already off loaded the broken steam iron and some cardboard. I ask, full beam smiling, where should I put this? He barks at me “Are you English?” I knew I was doomed from that moment. “Erm yes” shit should have said Scottish, Welsh anything mental note to self or just No. “where do you live” – disclose location. Oh my you’d think I’d just killed someone. “oh non, non, non” I can’t be bothered to type the amount of no’s. “you go” “leave”. My pleas of I’ve always come here, can I just drop these off the once fell on deaf ears and yes my inner Reggie Kray had to be bashed down good and proper as the rage was welling up. So a merci bien and a wide range of English expletives followed including ‘raciste’.  I said it in English so there’s no way he bridged the gap between racist and raciste as that’s just not happening.

So I’m not in a good place at the next Déchetterie – all victim like  – I rock on up to the next one. We had inadvertently put 2 x black bin liners of toys in the wrong skip. This Angry Elf was a lady and more disgusted than the last Elf.  She yells at me “what’s in the bag?!” “toys” I yell back (mentally yelling you arsehole). Again I’d obviously been guilty of murder somewhere as the reaction was totally disproportionate to the crime committed. “oh non, non, non” it went in the wrong one. Well blow me down.

How we going to sort this unholy mess out? Best you call a meeting and get 5 workers to discuss at length how you go about retrieving 2 small tied black bin liners out of the skip. She’s on the blower. She’s on her frigging walkie-talkie grassing me up. I hear “the lady has put it in the wrong skip, its noted..” Is she talking to the other Angry Elf? I don’t know but I am ready to knock her out. I say I’m sorry I made a mistake my first time here..she’s not happy with that. Next question “English?”. Seriously? What has my nationality got to do with my junk? I’m not answering that “card?”. Now, I’m angry – I thrust it at her she’s mighty disappointed that this is my déchetterie. Ahh all sad are you?- So I snatch it back after we’ve confirmed we’re all good here. Now, in my head I meant to snatch it but I actually managed to do it physically – whoopsie. Naturally the Angry Elf has gone into proper melt down shouting at me. I just carry on putting my stuff in the correct skips and muttering in angry French… “there are 400,000 French in London and never would I speak to them like this…”.

Master Normandy is like..”mum what are you actually trying to say?”. Get in the car..go…go…go..go.

Now on further discussion with others – it appears the The Angry Elf at the second déchetterie is also affectionately know as “the Nazi”. “oh you met the Nazi at that one did you she’s always barking at everyone!” Afterwards I didn’t feel so bad about lowering myself to rude behaviour and snatching my card. I also got over myself regarding being treated with contempt because I was English – I was because that’s the way these two individuals are. It can sometimes be easy to think that’s the case when you live in a different country – things become more magnified. We’ve all come across people like this on a regularly basis, when we’ve lived in the UK, or from where ever you hail from.

I have since heard lots of happy stories about happy déchetterie Elves which has made me…well…happy!

You have been reading Our Normandy Life!

Here is a link to Larry David – Pig Parker

If you haven’t seen Elf then yes another great Xmas film and I love the scene where Buddy The Elf says “oh you’re an angry little elf”. This is now my preferred reference to angry people.

8 thoughts on “The Angry Elf At The Déchetterie”